Walkabouts on the Prairie 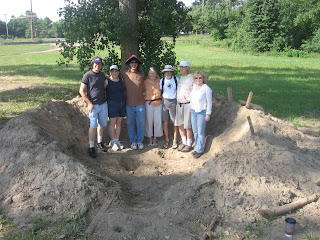 It started with a simple yearning to hang out together, be outside more, and not add another meeting to our overburdened schedules. The "we" here was KAW Council, the local bioregional group I've been part of since it started in '82, that meets annually for a weekend gathering each spring, plus does other workshops, events, and mostly, a lot of potlucks. At our annual meeting last May at the usual place -- Camp Hammond (located between Lawrence and Topeka), we again perused the ways we could be with each other more and walk our bioregional talk until we stumbled on the idea of simply getting together one Sunday morning each month for a walk with each other, a walkabout.

I've come to love walkabouts, being outside with old and new friends, moving my body and feeling the earth beneath my feet. So far, we've walked along the Kaw river from points on each side, through the Haskell Wetlands, and circled Mary's Lake. This month -- Oc 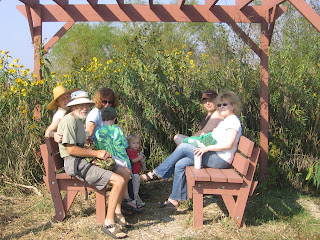 t. 19 -- we meet at Clinton Lake. We meet at 9-ish most times, but I imagine we might move the time a little later to correspond with the colder months.

In any case, there's simple joy and connection in walkabouts, an Australian Aborigine tradition of singing/telling the particular song/story of wherever a person steps. While we don't sing out loud (at least, not yet), I feel the sense of each particular place -- met communally by our moving feet -- coming through each walk.

Through KAW, we've done long walks for years -- at Camp Hammond through woodlands to prairie, but also all around the watershed, including Castle Rock near Quinter, KS.; the Flint Hills on various occasions; along the Platte River in NE; at night and in the daytimes; in winter as well as summer. Walking together is a way to deepen our connections, sometimes just by stepping in concert with each other and the pale or fierce wind, early morning heat or cool damp air, in silence or while our voices tell new stories and re-tell the old ones we've come to love for how they make us laugh.

Come join us any time we're walking, and feel free to bring your coffee, kiddies or walking stick. See more at the KAW Website or blog.

Pictures: A bunch of us in a big hole near the KAW river, August; and some of us on a bench in the Haskell Wetlands, September.
Posted by Your Program or Project at 6:51 PM

It's true, these are nice times. I'll post some more pix from the wetland walkabout on KAW's blog soon.