From the Mountains to the Ocean and Back Again: Two Deaths in One Week, and a Whole Lot of Hats

A week ago, we hit the road to attend the memorial service for Woody (who I wrote about in Dec. on this blog), our very dear and beloved cousin, who died from a rare form of lung cancer on July 2nd. We got to Fort Collins, CO., where Woody's wife, Janet, lives, and we were soon meshed with family, friends and neighbors, there to show their love for Woody and Janet.

Because Woody loved fireworks, the memorial service was set for Fri. night, July 4th, with optional firework viewing afterward, and beforehand, the passing around of hats. You see, because Woody lost his considerably long, reddish blond hair due to the chemo treatments, and because Woody was born for storytelling with a particular bent toward dark humor, Woody was flooded with funny hats to wear. There was a cow hat (complete with mooing button), a cup-of-coffee hat, a viking helmet with blond braids, an ace newspaper man hat, a baseball cap with Woody's cut-off-ponytail attached, a giant fish hat, and many others. Of course we each donned one for the memorial service which, led by Woody's brother, Dennis (who is also a minister) in a multi-colored jester catp, included telling stories about Woody. Woody led us off -- via a recording Dennis did in the last year -- in a long and vivid story about how he and others dyamited out everything in the hole under an outhouse (way up in the mountains), or as Woody concluded, shooting the shit.

The next morning, my mom called to say that our very sweet and dear Henry died after his struggle with pancreatic cancer. Henry is my mom's great love, our kids' grandpa (called "Epa" since my mom is called "Ema," which is Hebrew for "great mother"), and Ken and my dear stepdad. So we loaded up the van, drove to Janet's for French Toast and goodbyes, and then booked it back to Lawrence, arriving home at midnight, just in time to sleep for four hours before leaving for the airport. The trek to NJ, via Baltimore, and via the July 4th weekend traffic jams, is something I'm trying to forget, but suffice to say, we were soon at my mom's house along with all my sibs and their families.

Of course, too much traffic and travel led us lock the keys in the rental car trunk which, it turned out, couldn't be opened because this car sealed its 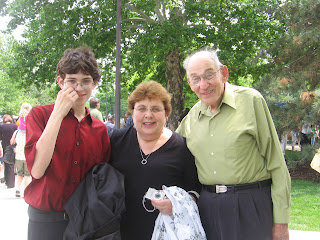 trunk as a security feature at such moments. After AAA and the car rental place gave up on helping us, we were at wit's end. Our funeral clothes were in the trunk, our hotel was 12 miles away, and we were blocking mom's car. After three hours of struggle, I looked up and said, "Help us, Henry." At that moment, Eddie stuck his hand into the trunk through the backseat being pulled out, and landed on the keys. Thank you, Henry!

On Monday, we had Henry's funeral, which also included the telling of stories. My sister Lauren said how thrilled Henry was when, at age 85, he rode one of the wildest rides in Disneyland. My sister-in-law Tammy had stories about Henry's generosity and sweetness. And my mom said that she had just lost the one great love of her life. Back home, there were more hats: Henry loved hats, especially beautiful caps commemorating wherever he traveled. We were each to take one or two, and for the rest of the trip, I wore a Grand Canyon cap I had bought for Henry's 85th birthday. 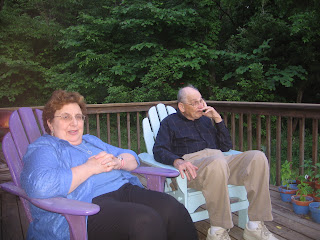 The trip home included another new experience. When our flight was delayed enough to ruin our connection, the airline put us in a taxi from the Baltimore to the Wash., D.C. airport, and off we went with an Iranian taxi driver who delighted us with stories of how he and his wife married in a mosque (his dad is Moslem), a church (his mother is Catholic) and a Buddhist Temple (his wife is Japanese Buddhist) while he cut across lanes quickly to speed through the rush hour traffic.

Now we're home, loving and missing Henry and Woody, and sending our deepest love and wishes for comfort to Janet and my mom.
Posted by Your Program or Project at 4:08 PM

So very sorry to hear of your losses...it sounds like you and your family were on a wild ride, yourselves! Thank goodness you're all back home, safe and sound. May your Woody & Henry rest in peace.