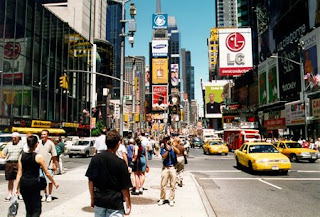 I've just returned (2:30 this morning after flight delays I'm trying to block out) from New Jersey and New York where I visited my loving stepfather (who is sadly dying from pancreatic cancer), and my equally loving mother. Because I was flying home in the evening, I took advantage of a long day and a lot of public transportation so I could do one of my favorite things in the world: Walk the streets of New York City until my feet blister, and even then, keep going.

Why do I do this? Well, for any of you who have walked in New York, you already know the answer. The energy for walking there is unparalleled in its vibrancy and variety. Crossing a street in a stream of people, once you get into the rhythm, is a musical blend of languages, cultures, and destinations. Each block is a small universe of its own making, whether there's a gourmet pet store with someone playing African drum under the awning, or an ancient cemetery next to a shop that sells lingerie for transvestites. The city was made to be walked, and once you get going, it's too delicious to stop (speaking of which, you can easily eat your meals still walking: I had a bagel, slice of pizza, and knish without losing the pace).

I also walk because this is home for me, or at leas

t, one of my homes. I grew up downtown, at the Nassau-Fulton subway stop where my father had a very small (10 x 10 perhaps) stamp store. The Subway Stamp Shop was in an arcade with all a kid could want: a Greek diner, complete with Greek lesbian waitress, who fed me chocolate malts and grilled cheese while telling me how to live my life; a barber shop full of stories; a much-loved candy stand; a shoe shop with old Black men who called me Sugar and told me crazy things my father did; and a jewelry shop run by a paranoid old man. My Saturdays and many summer days were spent underground, between layers of trains above and beyond, sitting in the stamp shop and drawing abstract art.

Even at age 8, I was old enough to go above ground and wander the city a little on my own, stopping for pizza or ice cream, and knowing how to avoid making eye contact with the occasional pervert. The three blocks between the stamp shop and the World Trade Center, along with a long stretch of Nassau street, were my territory. So now when I head downtown from Penn Station (w 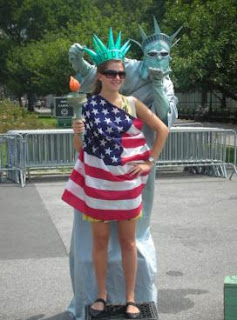 here I've just taken NJ Transit from near my mom's house), I feel that blast of home every time the heat rises from the subway grates, and I see Ann Street, Church Street, and the other friends of my childhood wanderings.

Yesterday, I did my usual routine: I went first to the subway arcade where I grew up, even if all the stores are gone and sealed in steal curtains, and I went someplace new. This time it was to Battery Park, just 10 blocks or so south of the stamp shop. There, I sat on a bench, ate a hot pretzel, and watched the Statue of Liberty watching me while lines of tourists snaked into the ferry and pigeons gathered at my feet. There were also men dressed up like Miss Liberty herself, wearing iridescent green-silver masks and gowns (that covered their stilts).

On the way there, one of my favorite only-in-New-York things happened: a stranger walking beside me just started telling me her thoughts at the moment. "That man has lady legs," she said. "He's got the legs of a beautiful woman. I wish I had legs like that." We both laughed and compared notes on the lovely and feminine legs 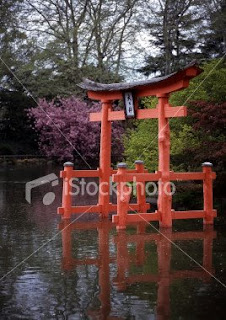 of the man in front of us.

Later, I took the train to Brooklyn (after my ritual stop at the Duane-Reade pharmacy for foam shoe inserts), where I went to the Botanical garden. When I first walked in, the twisty and tall pines were so enchanting that I stepped off the path to sit against one in the shade. Then there was the Japanese pagoda -- brilliant orange-red -- sitting in the pond where I could see gold fish the size of hot cats making the rounds. A German woman spoke kindly to a small Japanese boy about the beauty of the fish. A Chinese man took photos of his beloved with the pond behind her. Strollers and backpacks abounded.

Back in New York, I was determined to hunt down the greatest knishes in the city, so I set off for Houston street, which meant taking a train to Chambers street (about 10 blocks south), and walking through Soho between the French boutiques and elegant apartments. Once 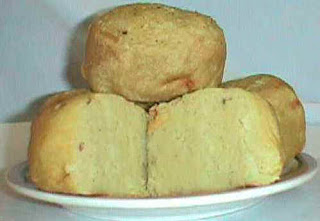 on Houston, I headed east for a long, long time until I got to Yonah Schimmel. The knishes didn't disappoint, and neither did the corned beef sandwich at Katz's, the same place where Harry met Sally (and they had the "I'll have what she's having" scene).

Walking back to the subway, a half-dozen knishes heavy in my backpack, the sun starting to set and a steel drum band performing across the street from a pick-up basketball game, I felt totally at home....and ready to go home too. Two trains, a tram, a long wait for a delayed flight, a long flight, and a surreal drive home later, I was back in Kansas, climbing into bed. And making plans to eat a knish for breakfast.
Posted by Your Program or Project at 12:23 PM

There is truly no place on the planet like NYC. Thank you for the virtual walk through the city! You really brought it to life with your words...yum..

Dear Caryn, let's go to NYC together and eat our way across the city together. While walking of course.

Your Program or Project said...

I think we need to have a girls-go-to-New-York walking and eating tour sometime while we're all mobile and hungry. Love,
Caryn