Where the Weather Can Kill You: Tornado Warning and Other Things That Go Bump in the Night 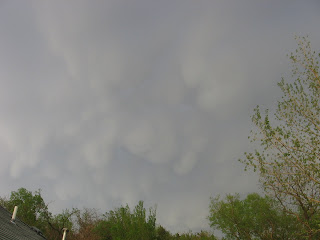 When my friend Sara was about to move to the northwest, she said, "I just want to live somewhere where the weather can't kill you."

Yesterday the wind battered everything and everyone. Trees bent, people tried not to topple over, and minivans like mine clung to the road with extra fierceness. No wonder that the wind picked up its pace when cooler air moved in, and at 1 a.m., I woke to hear tree limbs banging each other, a light roar, and unidentifiable flying objects meeting in midair collisions. "It sounds like we're having a tornado warning," I thought, and then the second thought came about how such a warning meant leaping out of bed and getting the kids and terrified dog (bad thing to be a Kansas dog who fears thunder) to the basement in a hurry.

"Caryn, get up now! Kids, get to the basement. It's a tornado warning!" Ken yelled. He had been glued to the weather radio in the other room (as usual, given the circumstances and his impeccable -- knock on cottonwood -- ears for bad weather).

In a few seconds, we were huddled in the storage area of our basement, half awake, blankets half draped over us, and Ken and me running in and out to check the TV, the weather radio, and cajole the terrified dog out of a laundry basket upstairs. Cell phone in hand, I called some close friends, and Ken called his folks. "I'm already in my basement, holding tight," Kel said. "Courtney heard the winds and got us up," said Denise. Ken's folks got themselves downstairs on a small couch where, later after the warning expired, he went over and found them sitting quietly like "two peas in a pod," he reported.

But in the here and now, we were focused on how a tornado might have just happened in the northwest part of the county, and how the big, energetic storm heading toward our area was reported to have just the right kind of multi-directional wind meeting to form a tornado. Tornadoes by daylight are scary enough, but in the dark, we have to depend not just on radar and people calling into television stations, but on our ears.

I lived in Kansas for a long time before I saw a tornado, and then -- in the last few years -- small tornadoes starting popping my way. First there was the tiny, white tornado high up in the sky that Ken and I saw while stopping at our mailbox one spring day. It looked like an upside-down wedding gown. Then there was a similar tornado in New Mexico, high up but slightly bigger. It stayed in the same place for dozens of miles. A few years ago, we saw a tornado head toward Lawrence (we live south of town), where it proceeded to rip apart an apartment building and do other damage. It looke 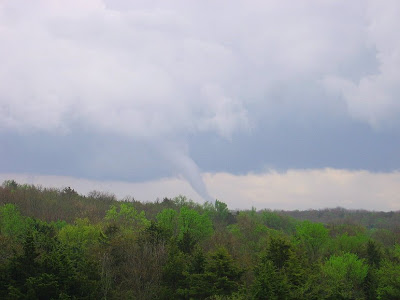 d like a long finger of god, and the kids and I (who had been watching too much Austin Powers back then), put our pinky fingers to our lips to act out Dr. Evil.

A year ago, I was lying in bed one fine afternoon, home alone, when I heard a rumbling kind of roar. I went outside, looked south, and the photo you're seeing of the tornado is what I saw. It didn't do much damage, was safely far from me, and lingered for about five minutes. I was so mesmerized I didn't know what to do so I called Ken on the phone. "Get the camera and keep taking pictures. Don't stop until it's gone," he said. I could post a dozen more pictures like this one, but you get the idea.

The tornadoes I've seen aren't the killing types, luckily enough, but whenever conditions are right -- the western edge usually of a thunderstorm when the clouds are exhausted and somewhat disorganized but the wind unduly fast, and a thousand other pieces perfectly attuned -- I'm watching. So all the other Kansans I know, living in a state where the saying, "Why would anyone buy a house without a basement" isn't a question but an affirmation. The largest tornadoes of the world tend to be just south of here -- Wichita, Oklahoma City (city in the U.S. with the most torandoes per capita, and perhaps the fastest and largest ever tornado with winds about 260 mph back in the 90s), and the general large swatch of south Kansas (where Greenburg was hit by a two-mile wide tornado a year ago), most of Oklahoma, and part of Texas.

The variety of tornado is vast and daunting, from rope-like remnants of tornadoes (which I think of as a somewhat dispersed herd of confused animals), to wedge tornadoes (such as what hit O.K. City and Greenburg), to ones that can and have carried 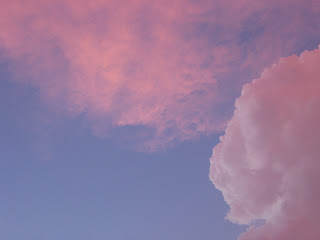 mail 200 miles away, sucked up an entire river, killed a mother while landing the baby safely in the field, and pierced a piece of hay through a hardwood tree. They come, move, and leave in mysterious ways, and yes, when you live in Kansas, the sky can kill you. But most of us, with enough warning, basement or cellar or strong room hold-out space, and the use of all our senses and our cell phones, can survive the sky.

And the sky is even more generous with its safer forms of beauty in these parts.
Posted by Your Program or Project at 11:48 PM