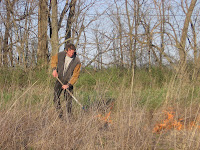 A few weeks ago, we burned the prairie near our home,
an annual rite of passage for us and for the grasslands, which
need to be freed from the distractions of invader trees and fed by the nutrients the fire imparts. 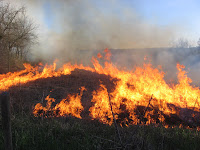 Burning a prairie is one part pitchfork dragging fire, one part carrying around water just in case, and one part hitting little flames that spill out the wrong direction with the back of a shovel (or just stomping on them, which works well if you dance fast). Of course the most thrilling part is dragging fire, and this year, we just so happened to have divided up, women on one side of a long rectangular prairie (about 10 acres) and men on the other. On the women's side, we took turns, each of us learning how to perfect our technique for wrapping 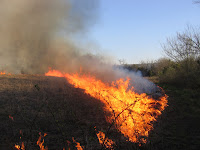 a bunch of dried grasses around the pitchfork, a little like spaghetti, and then dragging with just enough bounce and enough connection to drip fire in a straight line along the edge of the prairie. Sometimes, in one ecstatic drag, I would walk 20 feet, leaving enough drops of fire that would quickly form a straight line of flame behind me.

As we dragged fire on one side, the men did the same on the other, all of us trying to keep pace with each other. We do it this way so that the flames will rush toward each other, flare up gorgeously and dramatically, and then consume themselves, leaving behind a nicely charred prairie. I should say first, though, that we started out burning a line along the short side of this rectangle of land, and then went forth from each edge of that line until we reached the far side. Then we dragged the flames across the opposite short end of prairie to meet, men and women, and ignite one last wall of fire, so loud and so hot that we all had to rush the opposite direction into the woods until the smoke and heat died down.

Within a few weeks, the land starts greening up. Within a few months, the grasses are two or three feet tall, and by late fall, they start to redden. The colors alone that run through this land cover a lot of territory, all reminding me how our lives are made of such seasonal shifts, some slow, and some sudden.

For a related story on prairie burning on our land, see Liz Black's wonderful column.
Thanks to Heather Frost for the bottom two photos of Daniel (on the right) and me.
Posted by Your Program or Project at 10:17 AM

The burning prairie is one of the most unique, magnificent things I remember from my childhood. I love the picture of you standing, arms outstretched, next to the flames!