The Best Pie-Maker in the World: Remembering My Dear Friend Weedle 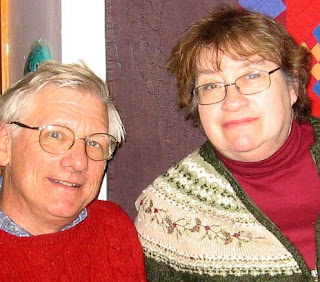 When Paul called my little cell phone that evening, I was immediately taken by the very still tone in his voice. “I’m afraid I have some bad news,” he said. I wondered if Weedle had a heart attack or a minor accident, but before I could spin out a scenario that ended with everyone intact, he said, “Weedle was killed in a car accident.”

Paul. Weedle. The friends we knew well before they found each other. Paul, who used to live in an upstairs apartment of a small alleyway home, the hermit of Old West Lawrence with his books, architectural drawings, sharp mind and beautiful heart. Weedle, who lived for years in an old farm house in , where she majored in meat loaf, child-rearing, a weary-but-knock-you-over humor, piles of books, insane genius in any word-focused board game, and the very best pies in the cosmos. Weedle was what you would get if you cross-pollinated Mary Englebreit with Rosanne Barr (the Rosanne before she just had one name) – and by the way, she loved both Mary and Rosanne.

I first connected with Weedle in a large car with her then-husband Walt, friends Dan and Kat, and my not-yet-husband Ken. We drove around , laughing uproariously, switching lanes fast on our way home from a Joni Mitchell concert at the Starlight Theater. The night smelled like roses, honeysuckle, car fumes, popcorn, and darkness. Weedle demanded we stop at a quick shop so she could get her mandatory diet Pepsi.

At the time, most of us subscribed to walking the carob road, eating little or no white sugar, chocolate, dairy, meat, and generally consuming a whole lot of tofu, granola, and those awful carob brownies. But Weedle never followed convention in such ways.

Weedle had an intellect of immense sharpness and wit, a heart as big as all the pies (and we’re talking thousands here) she ever baked lined up across , and God help you if you ever crossed her. Weedle loved her friends, family, and especially Paul and her children like nobody’s business, with a fierceness that rivaled a pack of Grizzlies. She collected quirky and moving tales from the lives of her children that showed just how much she loved watching them grow up, try new things and new places. The thrill of her day was when the cell phone rang with a call from Laurel, Will, Kevin or Kelly. She also adored all their spouses and sweethearts, she was over the moon about her grandchildren – Katie, Allison and Joshua.

She was also the funniest person I ever met.

At a party at our house last year, people were hanging close to the kitchen table, covered with beads of all kinds for making jewelry. Food overflowed the kitchen counters nearby, and there were about 30 of us reaching over each other for a piece of turquoise or another slice of Weedle’s cherry pie. Weedle herself was on the phone, trying to reach Paul to find out when he would be here, but the phone was continuously busy.

Weedle cooked up more than jokes. She was the diva of the kitchen in the grand tradition of comfort foods. Nobody made spaghetti and meatballs, meatloaf, fried chicken, chocolate chip cookies, mashed potatoes, gravy and especially bread like her. When I was walking gingerly from the car to my bed after my hysterectomy, Weedle was already on her way with an industrial-sized tray of her chicken pot pie.

Of course it was her pie-making ability that trumped all. She could not only make the best-tasting pie (winner of grand prizes in the very competitive pie division of the Vinland Fair, and deemed by my mother-in-law, a fellow pie competitor, to be the best ever), but she did it at the speed of light. I once timed her making a cherry pie from scratch (although the cherries came from a can) to oven: 6 minutes. Really, I’m not making this up. Her hands knew dough.

Her heart knew love. When Weedle met Paul over 15 years ago (at my backroom prompts of, “Weedle, Paul likes you,” and “Paul, Weedle likes you”), she met her match in mind and heart. While Paul is relatively quiet and internal, he fit around her like an exquisite home-made quilt. “You were the love of her life,” I reminded Paul the night she died as we sat in the kitchen, dishes Weedle washed in the drying rack behind us, and to our left, the open oven to warm the room. “She was the love of my life,” he answered.

She found in Paul someone who also brought home piles of library books to read on everything from the to Harry Potter. They went to farmer’s market together. They walked their pony-sized Great Pyranees down country roads. They took trips to , and other outposts. They played with their granddaughters. And they sat with us and our friends Courtney and Denise playing board games, mostly “Taboo,” a game where you have to make your partner guess the word on a card without saying the obvious thing. “It’s like a….” Weedle began. “Dishwasher,” I yelled, and we were right, again in a kind of telepathic word-game connection neither of us understood. Together, we prided ourselves on wiping our opponents into the ground, and we never lost when we played as a team.

Weedle was a whiz at any game that had to do with speed, words, imagination, and no wonder: As a long-time librarian after being an excellent elementary school teacher, and a writer, she was always a storyteller. When the kids were little, when the kids were grown, when the grandkids were born, when she took a road trip, when she stayed home.

The first Weedle story I fell in love with concerned her taking Will, who was just a little kid at the time, to see Bambi. When Bambi’s mother died, little kids throughout the theatre raised an intense collective crying chorus. After they were finally soothed quiet by their mothers, the movie’s final scene revealed a pastoral twilight expanse, with smoke from a campfire in the distance. “Is that where they’re cooking Bambi’s mother?” Will yelled out, tilting all the kids in the theatre into hysteria again.

Weedle loved that story for its irreverence and freshness, for its perspective, too, all three of which were ample in Weedle’s surprisingly-tender, full-voiced, fierce and imaginative writing. From her short essays for an old publication, Well, Well, Well, to the brilliant memoir she was writing of late, Weedle’s writing brought to the page all you saw of her and so many more layers. The writing was gorgeously funny and poignant, just like the writer. It was one of Weedle’s great dreams to have more of her writing published.

As the news lands, I remember the long after-dinner walks we took from her house to the road alongside the elementary school, watching the sunset through fields of coming twilight. I see her turning to my children – from the time they were babies through their teen years – to hand them cookies, videos to watch, and roll her eyes at wry asides. I think about the last time we were together, New Year’s Eve, with Paul, Ken Denise, Courtney, Marek, Daniel, Natalie and to eat vast quantities of miniature eggrolls and toast the New Year with sparkling grape juice at . We played a game we had come to love because it often made all of us laugh ourselves into falling-over crying.

It’s called, “Moods,” and for this game, there are 8 moods, each on a card, displayed at any given time. When it’s your turn, you draw a card with a statement like “It’s getting bigger” or “Would you like fries with that?” and shake the dice in a little cup, look inside, and see which number mood you have to bring into how you say this statement. Everyone else has to guess which mood you’re conveying in your voice.

Life is giving us all a new card to draw here, and the moods on the table, for me this week, are numbness, irritability, fear, grief, despair, spacey-ness, love, and sadness. I know Weedle is on the other side of the table even though I can no longer see her, and my heart is breaking at how far away she is. Yet at home, on the shelf in our refrigerator door, are a few cans of diet Pepsi she brought for herself for New Year’s Eve. I think I’ll keep them there as a fitting and well-placed memorial of someone, even without the diet Pepsis, I never could forget.

Please see http://www.LovingWeedle.blogspot.com for a community scrapbook on Weedle and lots of her good writing.

Posted by Your Program or Project at 8:37 PM

Ah, Caryn, a more beautiful tribute I have never read. Weedle was very fortunate indeed to have such a friend as you. Her memory lives in your words.