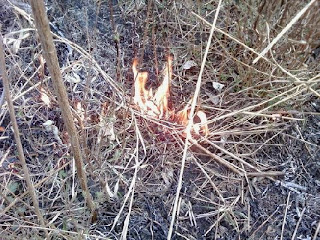 Saturday around 4 p.m. when we were at the hardware store, Ken said, "You know, I think the only window to burn is about right now." He was right: it had rained for days beforehand, the morning was barely dry enough, but the winds were too high, and more rain was coming. Considering it was April 11, and we were supposed to have the fields burned the first week in April, it was time for action. 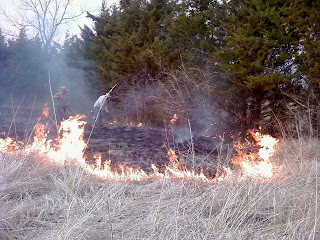 Luckily for us and maybe not so fortunate for him, I ran into Mike Caron in the check-out line at the hardware store. "Want to burn some prairie in an hour?" I asked him, and after juggling his schedule a bit, he said yes, and he even brought a friend. We called the guys who lived on the other side of our hill -- Monte and Brent, and they also showed up along with Brent's girlfriend Amy. Ken's pal Dave came out, and within an hour, we were lighting matches, dragging pitchforks of fire (it works bes 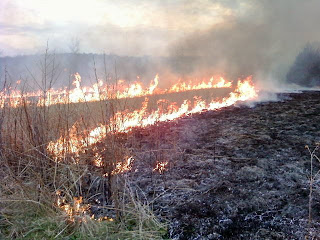 t to wrap up the loose grass like spaghetti on a fork and then drag it), and hauling water in case things got out of hand.

They didn't, and the wet ground made for a good safety valve although we did see a few cedars go up like, well, Christmas trees (but that always happens). The burn was also very fast -- we burned over 15 acres, broken up into about five fields, in less than two hours. 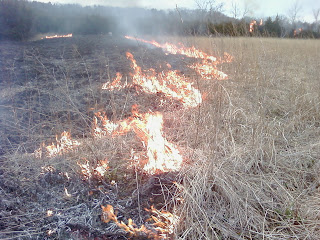 Why do we burn? Prairies need to be burned to bring more nutrients to the soil, clear out the invader trees, and make way for new growth. The history of the prairies shows us that lightning was a great fire-starter, especially during a time when prairies weren't 99% replaced by farms and concrete. There's also evidence that many plains tribes regularly burned the prairies. We also burn bec 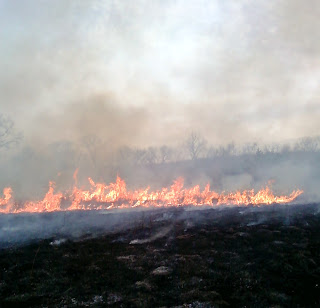 ause we're required to by the law -- it's a condition of the USDA program the farm is enrolled in to restore and maintain these native grasses.

But there are other reasons to burn: it's outrageous fun, a great way to get to know fellow-burners, and for me, always a ritual of spring -- clearing away the falling over remnants o 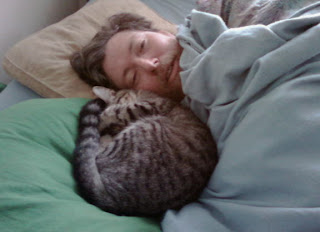 f an old season, preparing the ground of this land and my own heart for what's next to come.

Pictures: All from the burn, plus Ken afterwards, catching up on some sleep.
Posted by Your Program or Project at 10:50 AM