How I Learned To Stop Worrying & Love America

A Black man is president-elect. A man who calls on each of us to bring our highest calling to our work and thoughts has been elected in one of the widest margins of popular vote in decades. Someone who speaks of sacrifice and hope in one breath is our president-to-be, and one I can call "my president" without sarcasm or shame. For the first time in my life (to paraphrase the oft-misrepresented words of Michelle Obama), I am proud of my country, but in my case, I don't mean "prouder"; I mean, "for the first time." 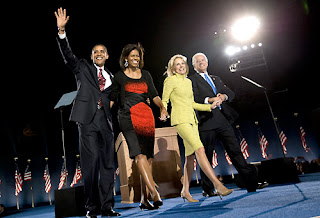 Last night, sitting on the couch with friends and family, glued to the television screen in between leaping up to check one of eight websites or listen to the radio, I felt the kind of elation I only knew decades ago, when I made my living as a political organizer (mostly working with labor unions), and occasionally, I would stand with labor bosses in some dingy basement hall, singing out "Solidarity Forever." I was young, told often I was naive, and totally in love with doing something to change the world, even if it mostly entailed taking many notes and sorting bulk mailings. At the same time, I knew the labor movement was an ambling, often-falling-down old soul, someone most people outside the movement (which is to say, most people) looked at as some nonsense-filled kook.

Over the years, like many of you, I've been involved in armfuls of campaigns and mailings, event-organizin

g and putting together testimonies or attending city commission meetings. I've stirred soup for a dozen, and joined a few to do bulk mailings for thousands. Whether the cause was environmental, labor, gender or educational, I've often found the most profound fellowship and meaning in this kind of work. Yet like many of you, I've also felt isolation at times, doubt, and a kind of trembling hope that just a few people (as it was and is often just a few) can make some kind of difference even though the difference is mostly a hundredth of an inch forward.

With this election, it's the same but different. The fellowship is vast and infinite. I think of the elders in Barack's father's village in Kenya, the kids now attending his old elementary s 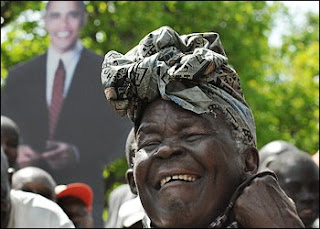 chool in Indonesia, the sea of humanity in Chicago or LA or New York. I think of my friends and neighbors in downtown Lawrence, cheering and crying, or driving down Mass. St. honking horns. I think of my family in Florida, my dear friends in Tennessee, my marvelous colleagues in Vermont, and the many of you I visit virtually each day on Facebook, all of us united by this event, this evolution, this breakthrough.

While I've always loved what America could be, now, finally, I love America.

What an amazing, historical, emotional night it was! One I won't soon forget.

Hi Caryn,
I am trying to reach Janet Tallman ..My daughter is one of her students and I would like to invite both Janet and you listen to a song written for Jacqueline ..If its possible please forward this comment to Janet..thank you,

The song can be heard on www.myspace.com/joeelmo it will be featured on my CD Reality Travels In A Melody