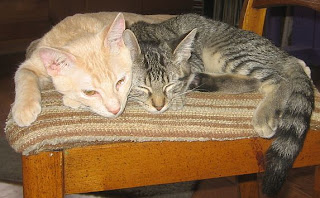 Today and yesterday and probably tomorrow is rain, but not the ordinary kind of hard and fast-moving summer rain. This storm is a dying hurricane, swept inland about 1,000 miles to linger slowly and gently over us, fading to almost nothing, and then nothing. Last night, we saw a white volcano-looking cloud standing in the middle of the storm, the center of Hurricane Dolly, Ken told me.

Usually, we have the kind of hellish heat and sun that we jokingly tell non-Kansans "builds character," and by that, we mean, "we still live here and often love our home despite the absolute horror of summer of late July and early August." This period of time usually is marked by highs in the over-100s, and lows in the low 90s. I remember someone telling me he moved to Lawrence in early August, arriving in the middle of the night to see a bank time/temperature sign that said, "1:30 a.m. Temperature: 99," and he seriously considered turning right around.

Inside our house, where our air-conditioners are lounging about instead of pushing iron, it's also anything but dog days. The kittens are about 16 weeks, and the older cat, Judy, hasn't seriously injured them yet although she growls, spits and hisses like the kitty version of "The Exorcist" when she sees them. The kittens just come right up to her, and cock their heads 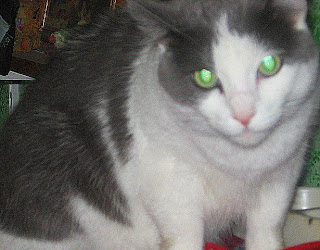 So it's cat days here, somewhat naughty, almost getting into the kind of weather and paper bags you wouldn't expect this time of year, and still ample with napping. The sky yawns. The kittens stretch out and sleep on the laptop. The big cat stands in the mild rain, still distraught over these new invaders. And the dog sleeps in the closet, terrified of the thunder and lightning that come at night. Nothing to complain about, but not what we expected.
Posted by Your Program or Project at 10:31 AM