One Good Note & The Larger Song: Learning the Cello 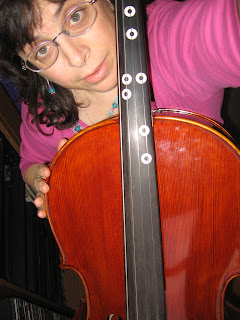 I unzip the case, and carefully, trying not to bump against a wall or cabinet, lift out my cello. Made in , put together by one luthier in the south part of town, and recently adjusted by another luthier in the north part of town, my cello has been with me for close to four years now. A cross between an antique rocking chair, a favorite dress, and a particularly loveable family pet, this cello has been déjà vu all over again when it comes to beginner’s mind and the sweetness of both one good note and the larger song.

I came to the cello and the cello came to me all at once after many years of yearning to learn it. One day I was in the Merc, our local natural foods co-op, talking to a friend who had recently begun cello lessons when I blurted out, “I always wanted to do that, too.” The next day I was renting to own a cello, and setting up lessons with a gentle-voiced celloist named Julianne Boren. Getting whatever I needed to get started – inspiration, a teacher, and of course, a cello – came so easy that I knew I had to follow. Learning the cello, however, didn’t, but I still followed.

I was, shall we say, a remedial cello student, taking months just to learn to hold the bow, and weeks of weeks to master (e.g. play badly but close enough that people could tell the tune) “Twinkle, Twinkle, Little Star.” Now, after close to four years of lessons, I’m just starting to be able to do vibrato (that way celloists make that fast, mellow siren sound). Lucky for me, the cello, my first, and now my new teacher -- fabulous celloist Matt Herren -- have all had a good sense of humor.

Practicing the cello is all about practice for me. There’s nothing to learn well enough to parlay it into some kind of income or something flashy enough to impress anyone. There’s no train stop where I’ll finally arrive; it’s more like riding the train, seeing the scenery and especially, feeling that sway up and down my spine as the wheel turn, and that because the cello, as much as it’s about sound, is also about vibration.

I love holding the cello between my legs and arms, letting its neck rest on my shoulder, and when I bow a good note, feeling the sound echo through my body, like ripples in a lake. It's like standing in the woods on an overcast day when the sun breaks through and lights the edges of everything just as a south wind sweeps through.

When the vibrations add up to a song, I’m encompassed in movement and sound at once. Sometimes the song is slightly injured and unsure of its footing; other times, it surprises me with its deep color. In any case, I’m just leaning into the sound and letting it show me its underside. If I fall off, I climb back on. When I let go and make contact at once, I fly.

When I started learning, I was barely out of treatment and surgeries for breast cancer, and just taking baby steps back to some kind of new normalcy. I sensed that wrapping myself around this instrument and letting sounds vibrate through my newly reconfigured and somewhat-fragmented body would help. I was right, but what I didn’t realize was that making this music, one pull of the bow at a time, wasn’t just about healing: It was and continues to be about everything else in the day to day practice of being alive.

That’s because practice is what we mostly get: We practice at love, work, parenting, friendship, spirituality, citizenship and all else on our path. Vacuuming isn’t a destination, and neither is apologizing to someone when it hurts, speaking up a public hearing, trying to figure out what to tell our son about his heartbreak or parent about her diagnosis. It’s all a constant music we practice at, hoping to make the note sweet enough. 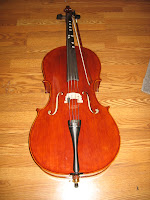 But then sometimes, often when we’re not expecting it or certainly not forcing it, we enter the larger song. As the poet Tess Gallagher writes in a found poem, called “What Cathal Said,”

You can sing sweet
and get the song sung
but to get to the third
dimension you have to sing it
rough, hurt the tune a little. Put
enough strength to it
that the notes slip. Then
something else happens. The song
gets large.

Posted by Your Program or Project at 4:51 PM

h@earthliWhat an incredible description of learning to play the cello and it's impact on your life! I especially love the idea that we are all "practicing".
Thank you, Caryn.

Yes, we walk, work, sing, make music, teach, learn and live "point blank," practicing not so much for perfection , but performing to practice, listening for the mysterious depths to surface. Grace comes unbidden to those who practice.
KE