Abiding Grace: A Tribute to the Late Grace Paley 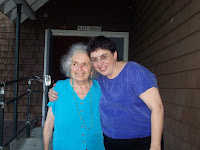 Note: Grace Paley, one of the most amazing writers and activists of our time, died in late August. I wrote this after experiencing her warmth, honestly and humor at the Power of Words conference in 2005. If you love to read or write, I highly recommend any of her collections of short stories. If you're interested in the Power of Words conference (we're accepting workshops proposals now), please see www.goddard.edu/powerofwords).

Liberation. That was the theme we chose for the third annual Power of Words conference held Aug. 6-9, 2005 at Goddard College in Plainfield, Vermont, and so when it came to finding a keynote speaker, who better than Grace Paley, the poet laureate of Vermont? A legendary writer and activist, who read often at Goddard, and lived just down the road, Grace was the shining star of writing, speaking and acting for justice with all passion and no pretense. I got her phone number from a friend of a friend of hers, dialed, and so began my odyssey of seeking Grace.

The conference, hosted by Transformative Language Arts concentration (part of Goddard’s Individualized MA Program), would bring together 80 writers, activists, storytellers, helping professionals, artists and educators from as far away as Southern California and London. Getting Grace, who lived only 20 minutes away, proved to be the trickier part.

The first time I called, I spoke with her husband, Bob (Robert Nichols): “Is Grace there?”

“Do you expect her back soon?”

“I wanted to ask her to be the keynote speaker for our conference.”

“She won’t do it,” he told me, but he also said I should call back on Sunday night.

I did. She wasn’t there.

I called again, and this time left a phone message.

A week later, I tried again. Bob answered, “Wait, she’s in the tub, I’ll hand her the phone.”

I ended up called back later that evening, and for the first time, spoke to her.

“I would like to go back to Goddard,” she told me. “It’s been a while. But I don’t know if I’m going to be on the with my daughter and grandson that weekend. Call back in a month.”

I did. She still didn’t know. Call back in another month.

By this time, I had her number just about memorized. She still didn’t know.

About six weeks later, just as I needed to finalize the program, she told me that she knew she had to give me an answer, but what should it be? She said she felt terrible about putting me off. In the background, I heard Bob yelling, “Just say no, Grace! Say No.” Grace paused, then said, “You know what? I’m going to do it.”

From that point on, I called her about once a month just to visit a little, see how she was faring with her wild schedule that brought her all over the country and beyond to give readings, speak against the war or meet with students even though she was well over 80 and was dealing with a recurrence of breast cancer. At one point, I mentioned to her that I also was a breast cancer survivor, and although she was actively going through treatment and tests, she instead focused her voice on me, “Oh, Sweetheart,” she said, “what did they do to you?”

“I had chemo and a bunch of surgeries, but I’m okay now.”

“Don’t let those bastards hurt you,” she said, referring to the medical establishment.

That was about a month before the conference. A week before, she called me. “That conference, when is it?”

I went over the details with her, and she told me she had been feeling so much better lately, it would be good to come to the college again.

The night before she was to speak, I figured it might be good idea to make sure she had the details handy. So I called. Bob answered, told me Grace was in , and wouldn’t be home until late.

“But she’s supposed to speak at our conference tomorrow. She’s the keynote speaker.”

“She’s old, she’s not feeling well. How can you think she’s going to be there?” he said.

“She said she would.”

“She didn’t say anything to me about it.”

“But she said she was coming. We have people who have come from all over to hear her.”

He told me that I was a little crazy for thinking she was my keynote speaker. But when I asked if we could send someone to get her, he replied, “What are you talking about? She can drive herself. Look, she’ll call you in the morning.”

Once I hung up, I knew it was time to think about a little thing I liked to call “Plan B.” Thanks to the help of novelist Katherine Towler, who was also reading at the conference, along with poet Joy Sawyer, journal therapy pioneer Kay Adams, and storyteller Meg Gilman, we whipped together a tribute for Grace.

The next morning, Grace called. “I feel terrible about this,” she said. I could hear the exhaustion in her voice.

“Look, Grace, it’s okay. We can do this without you. We’ll just do a tribute to you instead. We’ll read some of your writing and think of you.”

“I can’t believe I fucked this up,” she said, her voice gravelly with exhaustion. I told her it was fine,

“Are you sure?” She sighed. “Okay, just promise me that you’ll come and have tea with me sometime.” I told her I would.

I hung up in time to race to the cafeteria, find all my co-conspirators at a single table, and within 30 minutes, we had the tribute ready.

In front of all the conference participants, seated quietly although some looked puzzled as to why Grace wasn’t there, I explained what happened, and I told this story of calling Grace, and having Bob try – often without much success – protect her from both her popularity and her urge to keep giving to others. Gilman read one of Grace’s stories. Towler read four of her poems.

Than two others surprised us: Joseph Gainza and Sara Norton, who had worked on many peace and justice issues for decades alongside Grace, heard of the tribute and showed up to tell stories about Grace’s earnest compassion, great sense of humor and way of making everyone feel at home. They told of Grace’s remarkable equanimity and presence whether she was arrested at a protest, eating homemade pie in her living room, or reading a short story to a ballroom of over a thousand.

At the end of the tribute, one of the conference participants stood up and said, “I didn’t know Grace Paley before this, but now I realize we are all Grace.” Tears made her cheeks shine. I looked around the room where Grace should have been, and realized another kind of grace had overtaken us. The whole group sat in a silence for a moment, some smiling, some crying, thinking of Grace’s life of words and deed.

So that was grace, but grace is a surprising thing. Fast forward two meals later: It’s dinner, and I’m at a picnic bench with some conference attendants when I get a phone message: “Call Sara and Joseph immediately at this number. They have Grace and Bob with them, and they’re coming to the conference.”

Within 30 minutes, we had assembled most of the conference participants back in the haybarn. We set a chair next to the microphone, everyone sitting in a horseshoe of chairs, thrilled that the woman we fell in love with through her story and poems was actually about to walk right into that love.

And she did. Everyone sprang to their feet, some of us rushed up and hugged her, and people clapped, called out her name, and cheered as she sat down.

She glowed and yet was so utterly down to earth, a small woman on a folding chair who said in a accent untempered by years of living in that she could answer a few questions. Someone asked her about the war, and she told her of her hope for the world because people came out all over the world and protested the invasion before it happened, the first time, she reminded us, there’s ever been this kind of response to try to stop a war before it started.

Patricia Fontaine, a student and Vermonter, stood up and reminded Grace that recently in a speech she gave, she said her favorite word was “then.”

“It still is,” Grace told us, demonstrating through her presence (as well as her previous absence) how a story can seem to be over, but then – just like in Grace’s stories, just like in real life – something else happens.

I watched her stand to leave, the crowd again on its feet, and then she stayed for another 40 minutes, visiting with a young woman who gone to Sarah Lawrence, where Grace used to teach; posing for pictures with a Canadian Jung scholar, and hugging anyone who came to thank her. I posed for my own picture with her, all the time realizing that if liberation through our writing and lives is about anything, it’s about the grace of letting, and many times, helping the story that seems to be over to begin again. It’s about the freedom inherent in a simple word like “then.”

Posted by Your Program or Project at 8:33 AM

I've been printing out remembrances of Grace for an aged friend - this is one of my favorites. Thanks.

I am Grace's granddaughter and I just wanted to let you know how much you captured my gramma and Bob in this piece. I really love it. Thank you for bringing back her voice.

Your Program or Project said...

It's a great honor to have Grace's granddaughter reply, and I'm so glad you loved it. Your grandmother was/is the most down-to-earth, real and fully alive writer I've ever known. It was such a gift in my life to get to talk with her on the phone and in person, and it was also clear from our conversations how much she loved her family (and put her family first).
Take good care,
Caryn

What an extraordinary tribute. I met Grace Paley but only briefly at a Bread Loaf Conference, and I found her radiant and wonderful.

Your posting about her here is so glorious and enriching. Something that doesn't restate the past, but holds it.

Thank you for visiting my own blog today, and for your own kind words.

Caryn,
This was like a driveway moment on NPR; I couldn't walk away until I finished.

Looking forward to our January gathering at TP.

What a wonderful story. Another morning of tears. with my coffee. Thanks, Caryn!